Son of a Kitchen Witch series

Son of a Kitchen Witch: Book One

As if being a high school student isn’t already hard enough, Bobby Hawthorne and his best friend, Angelina Dellapicallo, struggle to understand the emerging secrets of witchcraft and magic — secrets strictly guarded by Bobby’s overprotective mother and her friends. The unexpected appearance of his spirited grandfather sets in motion a series of events that sweep the young teens down a dangerous path — one inhabited by an ancient evil that threatens not only Bobby and Angelina but their whole community of witches as well.

Available in Paperback and ebook on Amazon and Amazon UK. Also available from Barnes & Noble, Apple and Kobo

The Darkest Night of the Year ~

A Son of a Kitchen Witch novella

He wanted to be the magic; she dared to try.

Bobby Hawthorne loves the magic of the holidays, and for the first time he can share the truth behind the magic with Angelina, the girl that he loves and with whom he shares a special bond. But when the magic literally starts to disappear, along with Angelina, he realizes a sinister force has entered the light of his world and his only hope may reside in a frightened stranger with a dark secret of her own.

If Wishes Were Horses

Neil Marshall is a graduate student in the University of Houston’s creative writing program and a promising young poet. However, facing a financially and emotionally draining divorce has him worried about more than paying tuition. So to make ends meet, Neil moonlights as a chef for a high society caterer.

To avenge his friend, clear his name, and rescue a missing championship thoroughbred, Neil infiltrates the dark underworld of horse theft and illegal breeding. Neil’s friends–his attractive writing teacher, his cooking colleagues, and a freckle-faced teenage horsewoman–offer their support. But their cheers quickly turn to gasps when Neil becomes the hunted.

Available in Paperback and e-book also from Amazon.com and Amazon UK. Also available at Barnes & Noble, Apple and Kobo

A Whisper of Rage

Graduate student and part-time chef Neil Marshall only wants to go for an early morning run. Instead he witnesses the near-fatal shooting of legendary Houston private eye C.J. McDaniels, and he fears the gunmen can identify them.

Before long, Neil finds himself in the eye of a hurricane, his quiet academic life ripped apart as he rides a swath of violence that cuts across a mansion in River Oaks to an eerily silent suburban home, from a secret hospital room to the bed of a fascinating woman. In Houston’s sultry summer heat a deep-rooted rage is building from a whisper to a roar.

NOMINATED FOR THE SHAMUS AWARD!

Available in Paperback and in e-book on Amazon.com and Amazon UK. Also available at Barnes & Noble, Apple and Kobo

While congressional candidate Chip Gunn sweet-talks power brokers at his Houston fund-raiser, all hell breaks loose for catering chef Neil Marshall. In the kitchen, Gunn’s guard is stabbed, and Neil’s assistant is found gripping a bloody knife, swearing she never used it.

But when the victim vanishes, Neil and his friends become ensnared in a lethal mystery where innocence offers no protection, and where people in glass houses never throw stones, but shoot to kill.

Available in Paperback and e-book also from Amazon.com  and Amazon UK. Also available from Barnes & Noble, Apple and Kobo

Forget a white Christmas in Houston. Poet, chef and amateur sleuth Neil Marshall sees a blue, blue Yuletide heading straight at him. And as if his holiday funk and the hectic seasonal demands aren’t enough, Neil’s grandfather, who bears an uncanny resemblance to old St. Nick, decides to make an unexpected visit. Soon, however, Neil learns that Grandpa’s normal holiday cheer is closer to holiday fear as the elder Marshall is on the lam from a murder charge back in Colorado. It’s up to Neil to nab the real murderer or else Grandpa’s twelve days of Christmas may be his last.

Out of control skinheads, a flashy magazine publisher, a dead celebrity chef, and a vindictive food critic make for one messy kitchen. Add one murder suspect in the person of caterer Perry Stevens, and you have a recipe for disaster. It’s up to chef and part-time sleuth Neil Marshall to turn up the heat and smoke out the real killer before his boss finds himself ordering his last meal a la cart on death row.

Too many cooks may spoil the broth, but one dead chef ruins the party.

Free for a limited time when  you subscribe to my online newsletter.

When Linda Garcia’s ex-lover is found dead, and the murder weapon is her gun, Neil Marshall and C. J. McDaniels must act quickly to prove her innocence. And when the ex-lover also turns out to be a drug dealer with gambling debts, things get complicated, especially since the real killer may be hiding in plain sight.

People are thirsty, and not just for change. America is in disarray. Food riots make the news daily. And Senator Leonard Litz has his eye on one thing–capturing the White House. With chaos as his playing field, Litz is in his element. Unknown to him, legendary gunrunner, Bear, intercepts information that threatens to block Litz’s political end run. Further complicating the senator’s plans are the efforts of Bernie Hawk, a young Special Forces Officer determined to see Lady Justice regain her balance. A dark horse senator calls the plays in the biggest political game America has ever seen, and even an all-out blitz by Bear may not be enough to sack him for good.

Book One: The Wastelanders 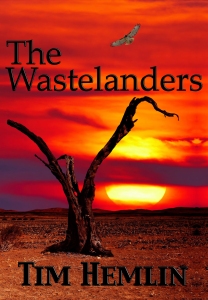 In the aftermath of climate change and the Great Pandemic, with American the clutches of a corporate oligarchy known as the Water Cartel, warrior-priest Joey Hawke finds himself trapped between a mysterious geneticist amassing a clone army and a group of political fanatics convinced that a dead president will rise from his tomb to lead them to salvation.

Caught outside his spiritual haven when the Cartel moves against the Wastelanders, Joey is aided by Bear, an enigmatic weapons runner, a lovesick Scrapwoman named Moon, and Bernie Hawke, his estranged father.  But against the Cartel’s military strength, led by the power hungry Rex Fielder, Joey’s only hope may be Si-Ting, a young woman with prescient abilities; a woman who not only holds the key to his heart but also to an American conspiracy to crown its future with the withered laurels of the past.

The greatest comeback in political history begins in the future . . . where water is power and power transcends time.

Available in paperback and ebook from Amazon and Amazon UK

Can the enigmatic Bear join forces with warrior-priest Joey Hawke, and Caballito, the legendary descendant of the ancient Running People, in time to rescue them? Or will they fall prey like so many others to the black silence of the Wastelands?

A Friend In Need ~ 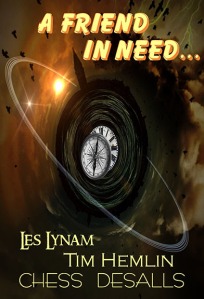 A Friend in Need is a short story collaboration between three different YA authors who combine their talents to create an intersection in an apocalyptic world populated with characters from their respective novels. LX and Jane (from Lynam’s Time Will Tell series) time-crash into Tim Hemlin’s The Wastelanders. Their only hope of returning to their own world requires help from Bear, Caballito, and the time-witch. Enter Calla and Valcas, (time-travelers from Chess Desalls’ Call to Search Everywhen series,) who land in the wastelands while conducting a time-search of their own. Will the travelers be able to return, or are they stuck in the wastelands forever?

The apocalypse won’t last forever. What will Jake Eliot do when he’s based his entire livelihood on hunting the zombies, which are getting rather scarce? How will he pay the bills, put food on the table? It’s a very sad day in Texas . . .

Be the first to know. Subscribe to Tim’s Newsletter to keep up with all these exciting new releases.

Rise of the Time-witch, Book Two in The Wastelanders series

The Light Maiden ~ Legends from the Wastelands

Port of Fire ~ Legends from the Wastelands